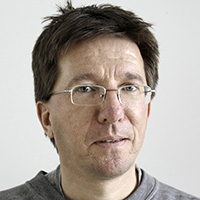 Michael Kachelriess is a professor at the Department of Physics at NTNU. He is specialising in high energy astrophysics

Data from satellites searching for high-energy cosmic particles from space show several puzzling phenomena. This leads us to believe that the Earth is still being affected by a supernova explosion happening two million years ago.

Our Milky Way might be a dangerous place to live because of supernova explosions which happen somewhere in the Galaxy approximately every century. The blast wave of such an explosion would strongly damage life, possibly leading to a mass extinction on habitable planets within a distance of ten light years.

High-energy particles from a further, hundred(s) of light-years away supernova would still produce a noticeable (beneficial or harmful) effect on the biosphere. This illustration of the region surrounding our Solar System shows the estimated location of the two-million-year-old supernova, lying close to the galactic magnetic field, that may have been the source for some high-energy cosmic rays observed today.

In our recent article “Signatures of a two million year old supernova in the spectra of cosmic ray protons, antiprotons and positrons” we put forward the claim that such an event happened to the Earth around two million years ago.

We find several signatures of this event in the properties of high-energy particles filling the interstellar medium around the Solar system and reaching the Earth in the form of cosmic rays.

A cocoon of cosmic rays

The local supernova explosion has produced an expanding cocoon of cosmic rays and the Earth happens to be situated inside. We believe that it is the presence of this local cosmic ray cocoon that explains several peculiarities found in the flux of cosmic ray protons and also of antiparticles, such as positrons and antiprotons.

Experiments on the International Space station

In particular, we have showed that the large flux of high-energy positrons and antiprotons observed e.g. in the satellite experiment PAMELA and the AMS-02 experiment on board of the International Space Station can be naturally explained by a two million year old local supernova.

From space to the deep ocean

Complementary evidence for a recent nearby supernova explosion is contained in the deep ocean crust of the Earth: A previously found anomalous high amount of rare iron isotopes in a two million year old layer of the ocean crust might be a remaining of ejecta from the very same supernova producing the puzzling features we observe in cosmic rays.